The star saxophonist from Rebop and Tenor Madness.

A stunning World Music guitarist with a unique jazz style.

This wonderful saxophonist makes a long awaited debut at Jazznights.

Pete Neighbour is a highly respected clarinet & sax player; originally from London and now based in the USA. He travels extensively throughout the world performing in his own inimitable style and Jazznights is proud to be part of his annual UK Tour. "Pretty tone, fearless swing and neat melodic embellishment."

Saxophonist Vasilis Xenopoulos is one of the most accomplished Greek jazz musicians of his generation and a genuine representative of straight ahead jazz. London became his permanent home after graduating with honors from the Berklee College of Music in Boston and gradually established himself as one of the UK's up and coming jazz saxophonists.

Famously combining the careers of jazz saxophonist and orthopaedic surgeon, Art has been described by critic John Fordham as "an appealing presence on the British jazz circuit for over 40 years. Originally a Dexter Gordon and Sonny Rollins disciple he has proved himself remarkably attentive to the saxophone styles of subsequent generations".

"Sam Dunn is a wonderful musician on all levels. He has a wide, interesting repertoire, beautiful sound, and is equally compelling with ballads and burners. And with his fast ears and quick wit, he's great fun on the bandstand" - Judy Carmichael, US Pianist. "Keep playing those right chord changes, you sound great!" George Wein, Newport Jazz Festival

Derek has been a member of the Jools Holland Rhythm and Blues Orchestra since 2004, has led Sax Appeal for over thirty years, fronts the funk/fusion band Protect the Beat, and is a member of the Ronnie Scott's Blues Explosion. He is renowned for his energetic, vibrant, passionate and charismatic performances on all four saxophones. 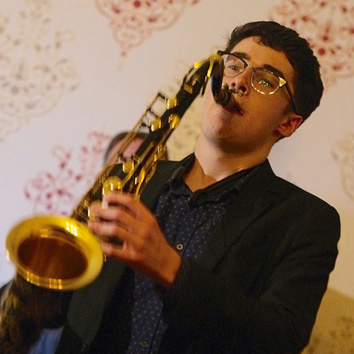 This 20 year-old saxophonist and guitarist is currently based in London. Since picking up the sax and guitar at age 7 Harry was sitting in at Jazznights soon after. He has since performed at venues such as the Royal Albert Hall, Latitude Festival, London Olympic Park, Southbank and the Bures Jazz Festival.

Laura brings her new project Minor Moments to Jazznights after it's sensational reviews and live performances. The band will feature her husband Paul Bartholomew on baritone sax, the brilliant pianist Steve Lodder with Bernie and Roger accompanying. A very special "Christmas Gig" night to end a great year at The Bell.

Unfortunately Andi Hopgood has laryngitis and is unable to sing for us this Sunday but luckily the wonderful saxophonist Jo Fooks happens to be available and is able to deputise. Andi's gig will be rescheduled for 2020.

"Christian Brewer is the kind of mainstream-to-postbop alto saxophonist who's easy to take for granted on the UK jazz scene. He's almost as agile and fluently expressive as the Charlie Parker disciple Phil Woods on fast pieces, and his ballad playing echoes the raw-nerve soulfulness of the late Art Pepper", John Fordham - The Guardian.

Debby has many years of experience as a professional singer in both live settings and in the studio. She started her vocal training at the Academy of Contemporary Music in Guildford receiving the high accolade of most outstanding vocalist of the year. She has worked as backing vocalist for Mariah Carey, Ariana Grande, Shakatak & Mica Paris.

In just a few short years, UK-based guitarist Nicolas Meier has carved a reputation out as one of the UK’s most original and uniquely talented guitarists. Drawing from a love of Turkish, Eastern & Middle Eastern music, Flamenco, Tango and more -- all mixed with jazz -- Meier is one of the rising stars in a vibrant British jazz scene.

“If you want to hear a genuine innovator with a creative twist on Jazz vocals include Estelle Kokot” London Jazz Festival. "She is the queen of nuance, understands the power of dramatic expression when sincerely delivered and crashes through the barriers of convention with disarming honesty then delivers the unbelievable". Gisele Turner - Going Places.

With a playing style combining melodic inventiveness, a rich tone and a lyrical style of improvisation, Josh is a regular performer at Jazz Clubs and Festivals across the UK, with recent performances including Ronnie Scott's and the London Jazz Festival. A musician in the finest tradition - just 100 per cent free-range swing.

"A truly remarkable young British alto saxophonist" Dave Gelly, Observer. "A performer of boundless ability" Ken Rattenbury, Crescendo. "The most swinging alto player on both sides of the Atlantic" Duncan Lamont. "An incredibly talented musician and composer" John Dankworth. "In his modest way, Matt Wates is a bit of a phenomenon" Dave Gelly, Observer.

Mark is rightly considered to be one of the best trombonists in the world. As a session musician he has worked with everyone from Frank Sinatra, Henry Mancini and Michel Le Grand on the one hand to Kylie Minogue, Paul McCartney and Elton John on the other! He wins British Jazz Awards on an annual basis.

Mick Foster and Geoff Mason perform a tribute to their past heroes. Mick’s baritone sax and Geoff's trombone pay their respects to the cool sounds of the 1950’s that were produced by Gerry Mulligan’s sax and Bob Brookmeyer’s valve trombone where their warm and swinging sounds found a way into the public’s soul worldwide.

Performing his own brand of fresh-sounding vocal improvisations to jazz standards and his own jazz arrangements of iconic pop/soul tunes & jazz originals (including some co-written with Jools Holland sax star Derek Nash) Kevin has garnered critical acclaim and fans far and wide with performances at Ronnie Scott’s and the EFG London Jazz Festival.

As part of the Bures Music Festival we are organising the Jazz Evening at St Mary's Church, Bures. The evening will start with our own Larraine Odell followed by the outstanding clarinettist Julian Marc Stringle. Julian will then join our headliner vocalist Jacqui Hicks for the main set. The Jazznights Trio accompany.

Tim was famously a member of the ground-breaking band Loose Tubes. "Those of us who have caught him live have been left blinking in disbelief. It's not just his mastery of the tenor saxophone, phenomenal though it is, but the absolute conviction of his playing that is so impressive." Dave Gelly (The Observer/ BBC ).

The best in modern jazz

You can join us at facebook, read reviews of previous performances on more opinions blog or tweet at twitter.com/jazznightsuk/